PG | 1h 34min | Comedy, Drama, Family | 17 January 2020 (USA)
2:39 | Trailer
9 VIDEOS | 47 IMAGES
In rural 1977 Georgia, a misfit girl dreams of life in outer space. When a competition offers her a chance to be recorded on NASA's Golden Record, she recruits a makeshift troop of Birdie Scouts, forging friendships that last a lifetime.

We're watching "Tiger King" on Netflix for sure. Our recommendations also include "Night on Earth", "Ozark," and more.

Prime Amazon
a list of 34 titles
created 1 week ago

Search for "Troop Zero" on Amazon.com 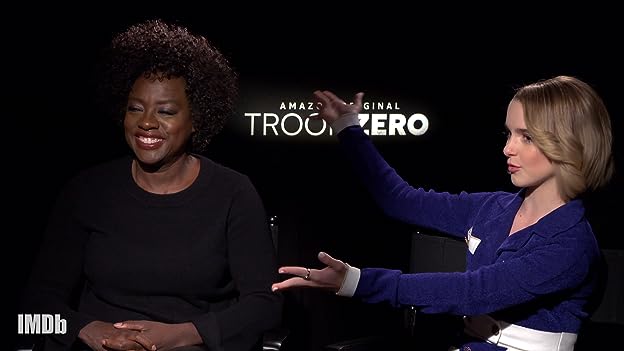 An 11-year-old boy who believes that he is the best detective in town runs the agency Total Failures with his best friend, an imaginary 1,200-pound polar bear.

Two elven brothers embark on a quest to bring their father back for one day.

When the world's best spy is turned into a pigeon, he must rely on his nerdy tech officer to save the world.

When an alien with amazing powers crash-lands near Mossy Bottom Farm, Shaun the Sheep goes on a mission to shepherd the intergalactic visitor home before a sinister organization can capture her.

A crew of rugged firefighters meet their match when attempting to rescue three rambunctious kids.

A widower with ten children falls for a widow with eight, and they must decide about forming a huge, unconventional family.

Three teenagers must help a Yeti return to his family while avoiding a wealthy man and a zoologist who want him for their own needs.

A science-fiction writer, recently widowed, considers whether to adopt a hyper-imaginative 6-year-old abandoned and socially rejected boy who says he's really from Mars.

Can Gordon's team win the Junior Goodwill Games in California in spite of all the set-backs?

After the disappearance of her scientist father, three peculiar beings send Meg, her brother, and her friend to space in order to find him.

An Iowa corn farmer, hearing voices, interprets them as a command to build a baseball diamond in his fields; he does, and the 1919 Chicago White Sox come.

The flightless birds and scheming green pigs take their feud to the next level.

In rural 1977 Georgia, a misfit girl dreams of life in outer space. When a national competition offers her a chance at her dream, to be recorded on NASA's Golden Record, she recruits a makeshift troop of Birdie Scouts, forging friendships that last a lifetime and beyond.

Show the Universe Who You Truly Are

Rated PG for thematic elements, language, and smoking throughout | See all certifications »

The Golden Records described in the movie were placed on both the Voyager 1 and Voyager 2 space probes launched in 1977. They are still traveling, and now, more than 40 years later, have already entered interstellar space. See more »

The trailer for this movie made it seem like it would be cute and funny and maybe even a bit inspirational. If nothing else enjoyable. But right off the bat I had trouble diving into the story because the wigs on Christmas and Boss were distractingly bad. Additionally the dialogue felt weird- not natural at times and didn't always flow with the emotions of the scene. There was a point halfway through the movie that I thought maybe I would enjoy the story better if I just read the script instead. Somehow it felt like the music and the cinematography and the dialogue would be mismatched at times and if you just isolated one from the others then it might be better. The actors all did a good job, really outselling their characters. The problem is they didn't have much to work with as far as dialogue. It almost felt like a waste of talent. The movie wasn't bad it just wasn't good. It didn't make me feel anything and I probably wouldn't watch it again if I had a choice. It's just okay.

This FAQ is empty. Add the first question.
Edit

Spider-Man
Airplane!
Midnight in Paris
The Natural
The NeverEnding Story